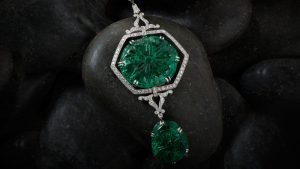 The name itself has undergone many variations over the centuries, but originally is derived from the Greek smargados meaning “green gem”. 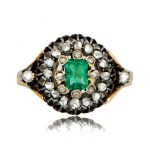 The mineral from which the emerald is derived is beryl, and gets it’s unique green color from the presence of chromium. One of the rarest of green gemstones – and certainly the most famous – the emerald is one of the “precious four”, together with the diamond, ruby and sapphire.

Emeralds are unique in that the chemical signature of an individual stone can pinpoint the location where it was mined, down to a few miles.

The emerald is the birth stone for the month of May. 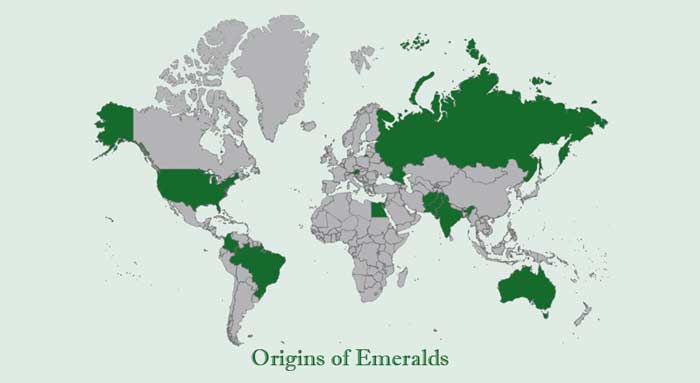 As mentioned above, emeralds have been mined in many regions of the earth across Europe, Africa, Asia, North and South America. Mined in Egypt for over 2,500 years and in Europe and India for at least 600 years, the largest modern producer of mined emeralds is Colombia which now produces between 50-95% of all emeralds, depending on the year.

Zambia is another large producer of emeralds, with nearly 4 tons of the stone being mined in a single location in 2011. In the US, significant deposits have been found as far apart as South Carolina and Montana.

What Makes an Emerald 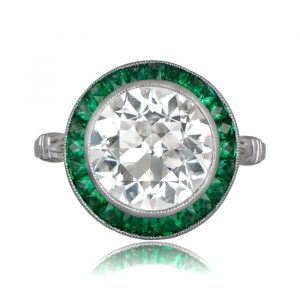 When diamonds are graded, the measurement is done using a 10x magnification loupe, in order to establish the clarity, color and cut with the carat weight making up the forth “C” of precious gem classification. Emeralds, however, are graded entirely by using the naked eye only. If no visible inclusions (foreign matter contained in the stone) can be detected by the eye, the stone is considered flawless. Such is the common nature of these inclusions in emeralds, that individual stones can be identified by using them as markers.

Because of the nature of the mineral beryl from which emeralds are built, surface breaking fissures, or cracks, in the raw material are extremely common, and leads to most emeralds being treated to improve the color and clarity. Although almost indistinguishable from a treated stone, those emeralds requiring no treatment to improve them command a much higher price. The treatment itself is easily detectable by experts, and is the reason why emeralds should never be bought “blind”, but should be tested first.

As with most precious gemstones, a particular color is assigned a higher value than others, and the emerald is no exception. The best emeralds are actually a darker green than you might imagine, with a target tone of 75% green being desirable, where 0% is colorless and 100% is black. All emeralds are actually a variation of hues ranging from yellow-green to blue-green, with the general principle of the greener, the better.

The non-uniformity of emeralds, caused by the inclusions present in most stones, means that most emeralds are subjected to shaping into pendants and other polished items, rather than faceted (cut) examples. For use in rings, most emeralds would be cut into ovals or rectangles (the classic Emerald cut) with facets cut into the top edge only. This is different to other precious stones, which are often cut with as many as 59 facets, especially diamonds.

Another reason for emeralds being subjected to this type of shaping is that, although emeralds have a hardness of 7.5-8 on the Mohs scale (diamonds have a hardness of 10, the highest), the inclusions can make the stones brittle when cutting, as they will generally be a much softer material and will easily split under pressure. 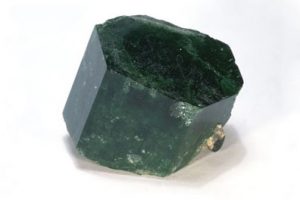 The Duke of Devonshire Emerald

The Taylor Emeralds – Elizabeth Taylor was given many pieces of jewelry over the years, by her various husbands and suitors, with few matching the beauty of the emerald collection given to her by Richard Burton. Comprising a necklace containing 17 emeralds, earrings, a ring and a bracelet with a further 12 emeralds, the collection is valued at over $100m.

Jackie Kennedy’s Engagement ring – When JFK proposed to Jackie Bouvier, he did so with a ring containing both a diamond and an emerald weighing in at a hefty 2.8 carats each. Although the stones were reset afterwards and slightly reduced in size, the ring remains an iconic piece of jewelry by anybody’s standards and has a present valuation of £1.4m.

The Emerald City – Okay, so it’s not real, but it shows the impact of the emerald on popular culture that it should have been included in a book written over a century ago. Seattle, Wa has used the official nickname “The Emerald City” since 1982.