Amethyst has something of an odd history. Traded and used in jewelry for thousands of years, it is one of the oldest semi-precious gemstones in common use today. But there’s more to it than just age.

The reason for its enduring popularity through the ages, though, is a little different from what you might typically expect. The primary purpose of carrying or wearing amethyst is that it promotes clear-headedness. That, however, is a somewhat more polite way of describing what the ancient Greeks thought it could do. 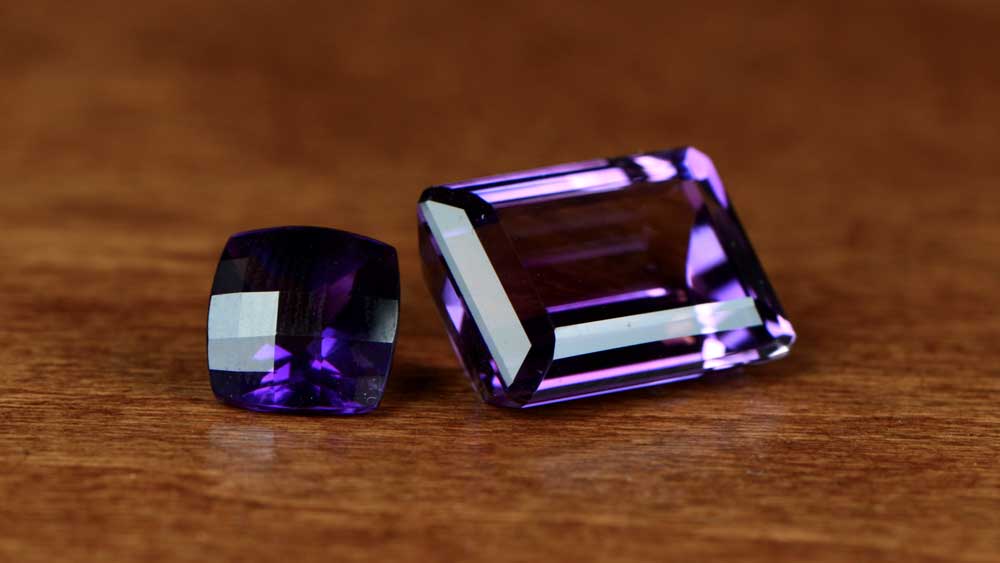 The name itself comes from the Greek amethystos – a(not) and methyo(intoxicated).

The belief was that drinking from a cup carved of amethyst or wearing the stone while drinking would protect the person from drunkenness. By the middle ages, Anglo-Saxons in England interpreted this to mean it would bring a clear head in battle.

Of course, it’s unlikely that anybody ever stayed sober based on whether they carried an amethyst stone or not. You would also hope that most soldiers aren’t drunk at the start of the battle!

There are significant amethyst deposits in several areas of the world. South America, Africa, and Russia are all notable regions for producing amethyst. Austria, not usually known for its gemstone providing habits has the most substantial opencast amethyst seam ever found. The US and Canada also have reasonably sized deposits in an area stretching all the way from Maine to Arizona.

Deposits being found in such diverse areas, mean it is likely that other deposits are yet to be discovered. 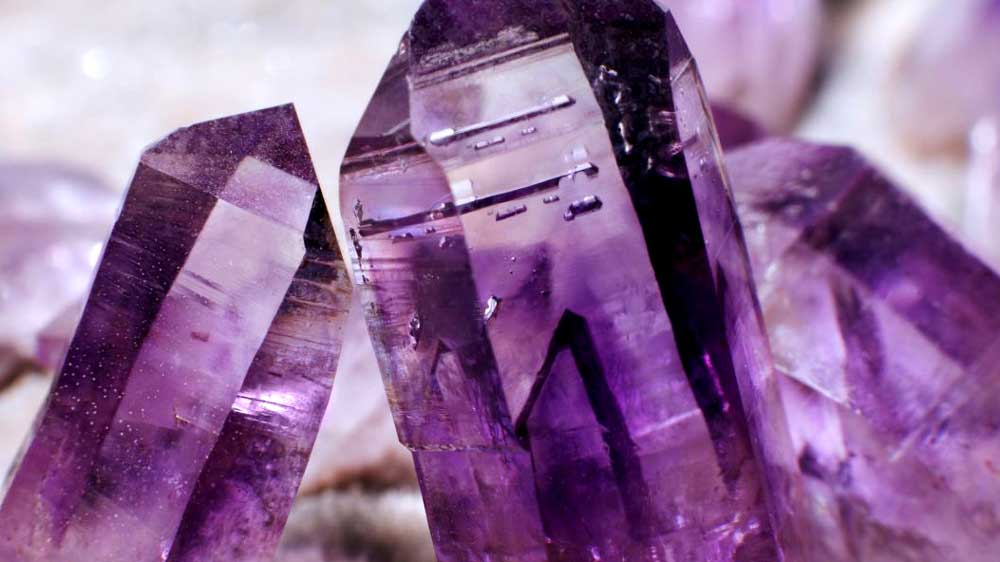 Amethyst crystals grow within cavities in the host rock and get their color from irradiation. The depth of the color can be anything from very pale violet to deep purple. The color also occurs in bands across the face of the rough stone and can make cutting difficult.

Initially, amethyst was classes as a precious stone, alongside diamond, sapphire, ruby, and emerald. However, the discovery of significant deposits means the stone no longer has the value it once did.

Amethyst is, like several other semi-precious stones, actually a type of quartz. When subject to radiation, iron impurities make the transition to silicon and take on a violet hue. A primary purple hue of 75-80% is considered the optimal grade, with secondary blue and red hues.

On the Mohs Hardness Scale, amethyst has a hardness of 7, which is slightly lower than emerald. Although softer than other precious stones, it is very suitable for everyday jewelry use.

As with other stones, heat can affect the color of amethyst. However, unlike most others where heat improves the color, an amethyst will turn yellow-brown with even moderate heat. Amethyst is also light sensitive, where prolonged exposure to light can cause fading. Further irradiation can help to restore the original color. 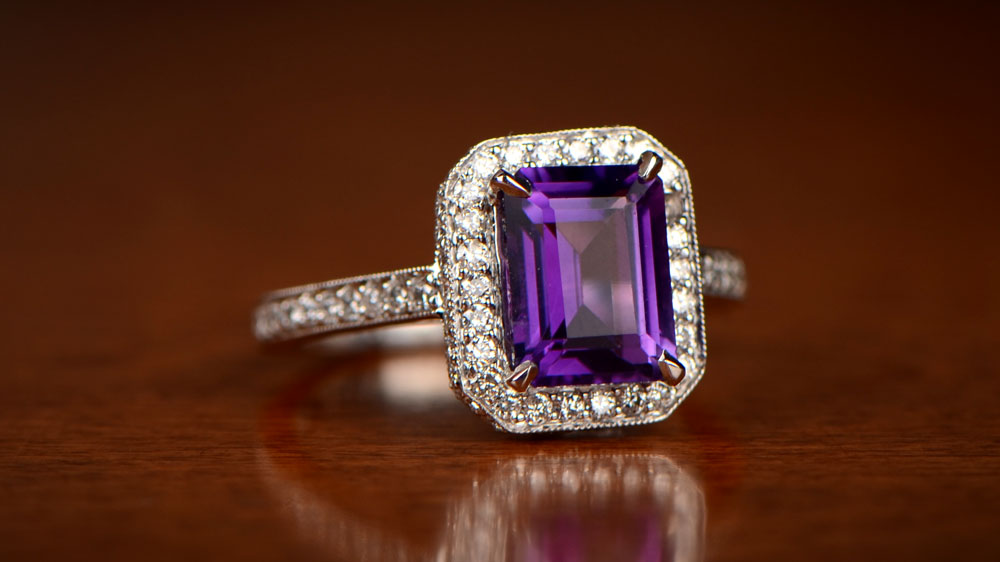 We get so used to valuing gemstones by the 4Cs, and it’s sometimes hard to break the habit. It is surprising to many when they find out that Amethyst evaluates differently. The only grading which nominally applies to amethyst is the color. Indeed, it is the color alone, occasionally along with how it is cut, which causes a value to be used.

The color is so important to the amethyst, that the size can often be rendered irrelevant. As long as the clarity is good enough to not have any eye-visible flaws, it is really all about the color. Specifically, how purple the stone is.

When using cut amethysts, the shape is a lot less critical than it is for diamonds. In fact, amethyst is commonly cut into “fantasy” shapes. These designer cuts are mass produced. Amethyst is also used in the carving of animal or other objects. The color shading which often occurs makes a visually pleasing and often beautiful effect.

Picking The Right Amethyst For You 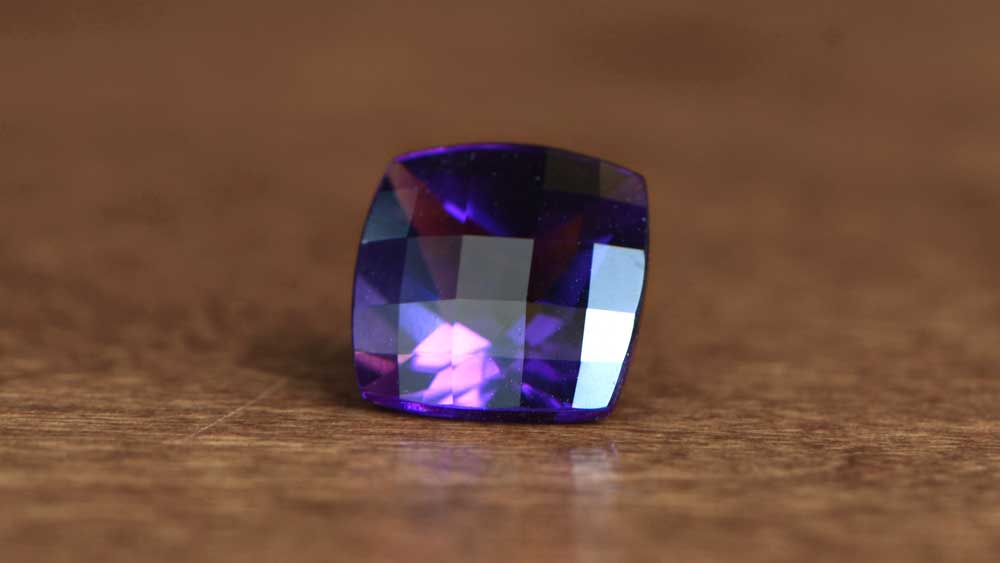 As mentioned above, amethysts aren’t about the carat weight, and it’s all about the color. Unless you are very familiar with color grading, it can be challenging to pick the “best” stone. Start with the clarity, and try and find a gem with no eye-visible inclusions.

After that, try and find one with good, consistent color. Amethysts are known for shading within each stone, and this can affect the value considerably. To see the extent of shading, turn the loose stone upside down, and view it from the pavilion. The stones are cut to show a good color from the crown, and this can hide a lot of things. The pavilion view may give a better indication of the overall color quality.

Finally, compare stones side by side. That’s usually the only way you’ll know whether purple is purple or whether it’s pale violet. One of the advantages of grading man amethyst is that it is all done by eye, even my master jewelers. That gives the rest of us a fighting chance at determining good from bad.

Caring And Cleaning For Amethyst

Heat will kill your amethyst, and this fact needs to dictate how you care for it. Warm soapy water is about the limit of what you should use to clean any loose amethyst or piece in which it is set. Too much heat can affect the color, and sudden changes in temperature can cause fractures.

For loose stones, an ultrasonic cleaner is okay to use, as long as the stone hasn’t been fracture filled. In such cases, the vibrations of the cleaner can damage the amethyst beyond repair.

Getting an Amethyst Engagement Ring

Are you looking to get an engagement ring with the February Birthstone? Estate Diamond Jewelry has a collection of Amethyst Engagement Rings. If you would like to see some of the Amethyst Rings, please feel free to email us. 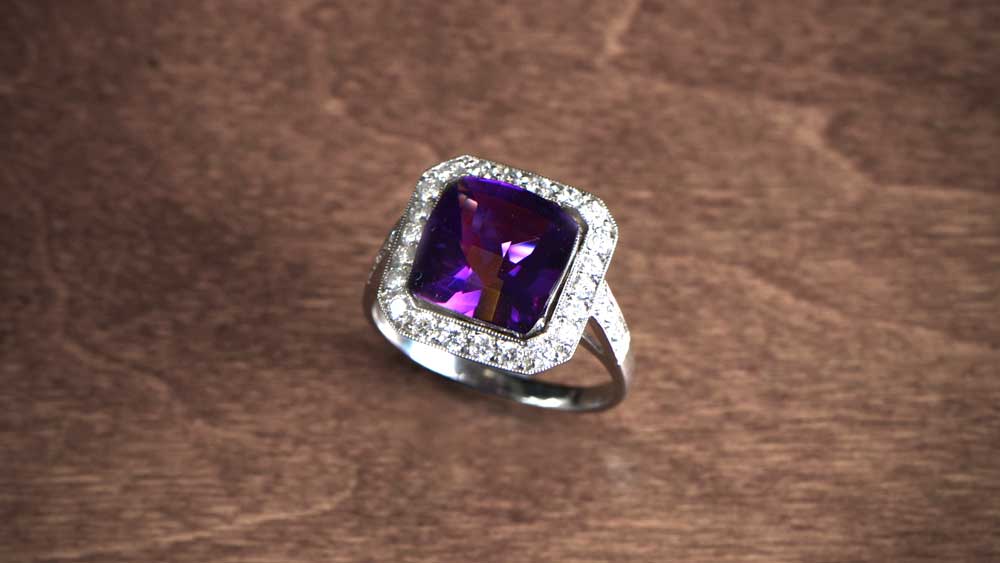 I love the color variation of amethyst!!