As a former British colony, despite the War of Independence, we Americans are known for our love of all things British. As an example of how influential a small lump of rock across the Atlantic has been to the US and the world, we still use the names of English Kings and Queens to label our style periods. A good example of this is the Georgian era.

In truth, the Georgian period isn’t just about the styles of the time. We use it to describe the political and social history, as well as design, literature, and art. The reason is that the term “Georgian” spans a period of 130 years. This is because 4 successive Kings of England had the name George. In case you were wondering, George III was king at the time America fought for and won independence. Although often portrayed as German, due to being descended from the Hanover line, George III was born and educated in England. English was also, unlike his predecessors, his first language.

His reign was memorable for many things. Whilst on the throne, George III presided over many wars and conflicts across the empire. By the time he reached the age of 60, he was beset with blindness and long periods of mental illness. Despite this, he was immensely popular amongst his subjects. Eventually, in 1810, George III accepted he could no longer lead the country effectively, and his son became Prince Regent, to rule until his father’s death. Prince George, who would become George IV was not a popular man, and many resented him claiming the throne.

Many continue the Georgian Era until 1837 with the death of King William IV.

The Kings during the Georgian Era: 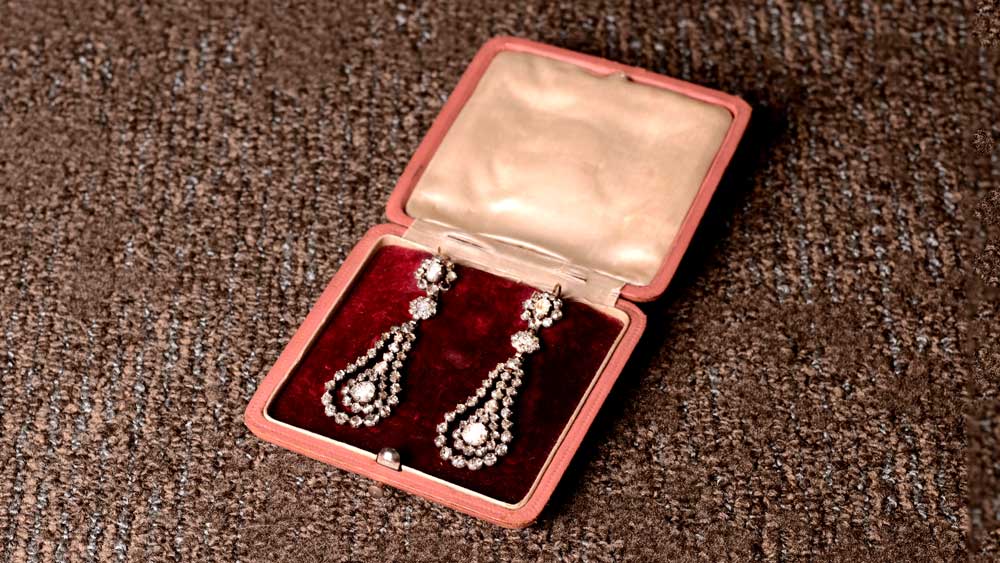 Because the period lasted so long, there were several style changes during that time. These are the Baroque, Rococo and Neoclassical periods.

All three of the design styles in the Georgian era suffered similar problems with the availability of precious metals and gemstones. At the time, the world was still very much beset with conflict. This meant that being that there was a lack of raw materials, many existing pieces of jewelry were re-appropriated to pay for the wars. This is especially true towards the end of the 18th century and into the early 19th.

Sadly, as a result, very little genuine Georgian jewelry exists today. As well as the reduced number of pieces being produced or surviving ones being used to finance the army abroad, Georgian jewelers had the habit of melting down pieces that went out of fashion. They would then re-use the metals and reset the gemstones. Even pieces that might have survived are very difficult to identify, as both makers and assay marks didn’t come into common use until much later. If a genuine piece of Georgian jewelry appears, it is far more likely to be dated towards the end of the period than the beginning.

Baroque jewelry was popular in early Georgian times and was highly intricate in design. Often it would contain exacting symmetry and very “open” designs, almost like lacework. The often overly ornate designs were better suited to necklaces and brooches, and so the best designs were reserved for those pieces.

Baroque jewelry came into fashion as a result of the reign of the French Emperor, Louis XIV. Louis demanded that people at court show their wealth in material terms, sewn into their clothing when they visited him. This caused something of a race to the bottom in that subtlety and finesse quickly changed to opulence and vulgarity. Mountains of metal and gemstones became common, and the trend for bolder jewelry made its way across the English Channel. Fortunately, designs were somewhat more subtle than the French courtier’s efforts. The pieces were, however, still far bigger and more colorful than anything known previously.

Baroque jewelry has seen a real renaissance in the past few years, with new pieces in the style becoming very much sought after.

As if to say “enough is enough”, Rococo jewelry completely replaced the gaudiness of Baroque. Gone was the symmetry and huge piles of color, replaced instead by asymmetrical designs that were both elegant and light. Rococo did inherit some elements of Baroque, however. The natural motifs of leaves and flowers, as well as bows and ribbons, made the transition easily. Of course, nature motifs lasted a lot longer than just the Georgian period, and formed a large part of the later Art Nouveau movement.

The Rococo design movement started in France but didn’t actually survive very long. Critics saw the style as frivolous and unworthy and, as Rococo was never a universal success. In fact, by the mid 18th century, the word “rococo” was common in England to describe anything that was old-fashioned. The style has since become both valid and important in European design history. Despite this, genuine Rococo pieces are extremely rare. It is such pieces that were the first to be melted down in times of material need, in order to create more popular designs.

The name neo-classical describes anything inspired the art of Greece and Rome in ancient times. With the English trend towards lighter, more sophisticated jewelry, neo-classical soon overwhelmed Rococo. Within the broader neoclassical period, two separate sub-styles emerged. The first was the Adam Style, as created by architect and interior designer Robert Adam. The style went back to the symmetry of the earlier Baroque period, but with much more subtlety. Motifs in the Adam Style included pillars, flower wreaths, bows, ribbons, hearts, snakes, rams heads and other ancient symbols.

The other neoclassical style popular in both England was Regency. Regency style closely mirrored that of the Empire style in France. Although classical symbols were still popular, Greek motifs had largely lost out in favor of ancient Egypt. Compared to most neoclassical jewelry, Regency pieces were far more decorative and colorful. Not quite back to the styles of Baroque, but certainly bolder than Rococo. In order to separate Adam and Regency styles, Regency is often termed as late-Georgian. The name neoclassical is primarily a description for the Adam Style. 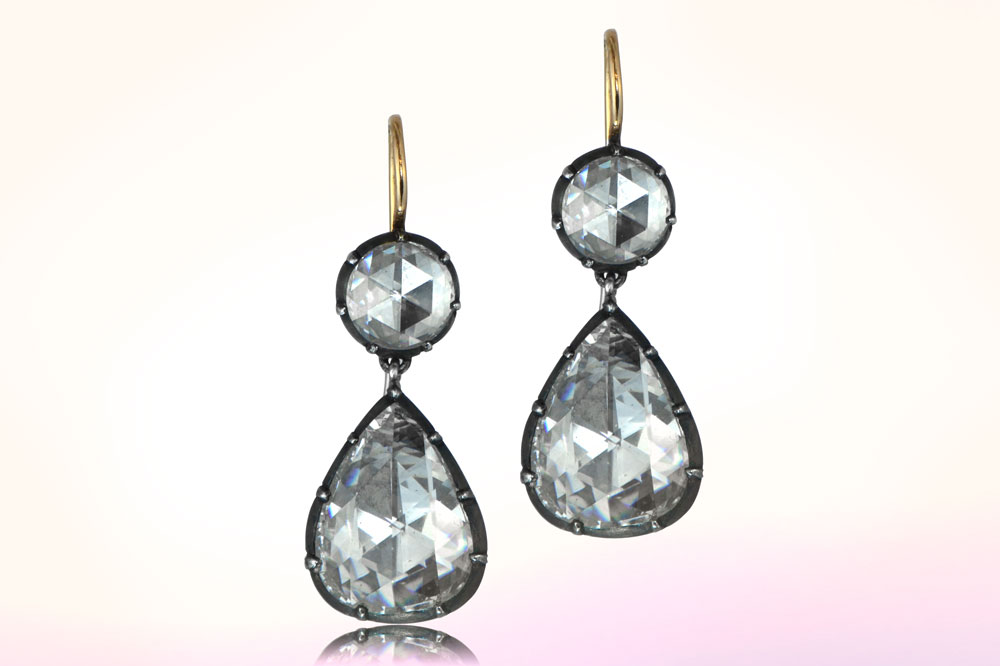 Silver was easily the most popular metal for jewelry in early Georgian times. This gave way to a bigger emphasis on yellow gold, as time passed.

Any gemstone was fair game for Georgian jewelry of any kind. However, it was common for ladies of the middle and upper classes to have both daytime and evening jewelry. During the day, when plenty of natural light was available, rubies, emeralds, and other colored stones were common. In the evening, when candles provided the only light, diamonds made the most of the limited illumination.

When gemstones became difficult to source, glass paste became very popular. Much cheaper than gemstones, and easy to produce, many makers started to use the material liberally. Most casual observers would be unaware of the inexpensive nature of the paste when in jewelry, that buyers and wearers were happy to endorse the practice.

How To Date Georgian Jewelry 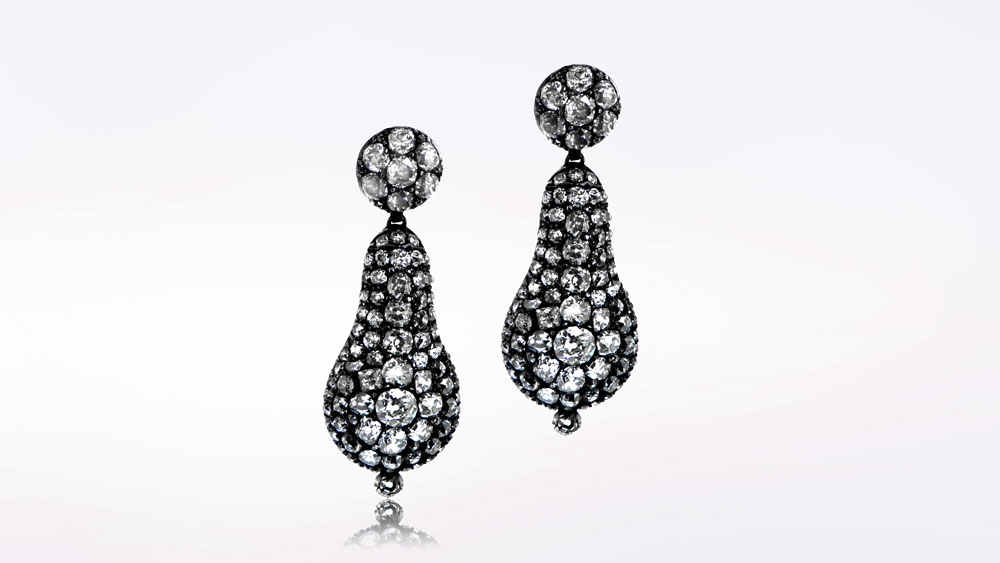 The lack of makers marks or assay stamps makes accurately dating any Georgian jewelry extremely difficult. However, there are some tell-tale signs which will, at least, narrow down the likely time period.

Although difficult to source in any quantity, it is possible to find Georgian jewelry. You may need to find a specialist dealer, though, to have any chance of the age of the piece being available with any accuracy. The jewelers at Estate Diamond Jewelry are expert collectors. Please feel free to contact us, if you want help searching for your Georgian Jewelry.

As an alternative, the actual styles of the Georgian era have made a significant comeback recently. This means many jewelers will have pieces which will be impressively Georgian in appearance. If it is the style which attracts you, rather than the actual age of any piece, then this is a good way to own the designs you like.