It’s not actually so long ago that planning and organizing a wedding was largely done along lines split by financial responsibility. The bride’s parents would pay for the wedding itself and make most of the big decisions, with the groom’s parents often providing a contribution by way of paying for the flowers. As costs increased, however, these lines became more and more blurred to the point where costs are now usually much more evenly shared among the two families. There are still weddings in which the choice is made to stick with tradition, of course, but it’s certainly less common than even 20 years ago. 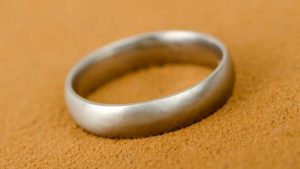 One of the few aspects of the wedding that managed to hang on to the old ways for a little while longer was the buying of the rings, but even that “rule” has been relaxed somewhat, over time.

Engagement rings are still typically bought by the groom-to-be, despite fewer and fewer proposals being the surprise event it once was. Brides are, however, choosing their own engagement rings more and more, often with matching wedding rings in mind further down the road, but the buying of the wedding bands themselves is now very much more a joint venture.

For reasons which will probably never quite become clear, wedding bands are seen as the slightly boring cousins of engagement rings. After all, people rarely ooh and aah over a gold band with little or no decoration, but this doesn’t do justice to the role the bands play in the marriage itself. After all, an engagement ring’s job is technically – if not emotionally – done when the first “I do” is spoken, but a wedding ring’s gainful employment lasts for as long as the marriage does. In short, it may well be a job for life. 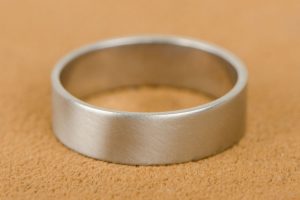 The fact is that the wedding ring is probably the most symbolic element of any marriage, and so it’s not unreasonable to think that choosing and paying for them should perhaps be done jointly between fiancé and fiancée. Despite this, wedding rings have long been bought as gifts for each other, and it’s only very recently that they have been bought as a kind of package deal, paid for equally from the same pot of money.

Part of the reason might be that matching wedding rings are very much in vogue now, and so any lasting remnants of secrecy about the design has been surrendered. It would also probably be slightly awkward to have a couple standing in a jewelry store splitting the check like it’s a night out with work colleagues at the Olive Garden.

There’s also actually a lot of sentimental merit in the practice. After all, it’s a major milestone at the beginning of a life together, so why shouldn’t that journey begin with steps that are both in time and in tune?

Really, the question of who buys the groom’s wedding ring is another of those which has no right or wrong answer. Weddings can be – and are – expensive affairs and, even if the main costs of the wedding are being met by one or both sets of parents, it’s nice to be able to do this with and for each other. If you are traditionalists, then, by all means, buy each other’s rings because, in the big wedding scheme of things, it’s actually one of the less pricey aspects of your day. If, on the other hand (no pun intended!), it’s solely about what the ring represents, then have fun browsing and choosing the wedding bands that you both want.

Click here to view our collection of Men’s Wedding Bands.