Gold, and other precious metals, often have one or more stamps on them to indicate the quality (fineness), manufacturer, year of manufacture and the office where the item was classified. Although some countries, such as the UK, have a legal requirement for any item being sold as a particular grade of gold to have been formally classified and stamped by an assay office, the US has no such scheme and, therefore, no such requirement. 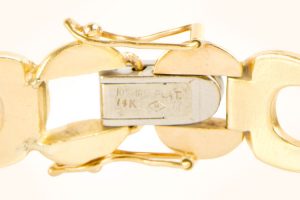 However there are assay offices in the US that operate within the national mints, and most jewelry manufacturers will have their products assessed and stamped to indicate the quality of the item. US law also states that items can only bear a hallmark if they have been applied by an official assay office, and non-assay marks indicating quality are deemed illegal.

Believe it or not, hallmarks in one guise or another have been around for about 2,500 years, starting first with punch marks on silver bearing the authority of the presiding ruler of the time. This is believed to be the earliest example of consumer protection that was ever used. By the middle ages, official, state-run assay offices were in use all around Europe, and the marks had become a loosely structured system of maker, fineness and the mark of the assay office that had applied the stamp. Later, England added an extra mark to indicate the year of manufacture and, eventually, a tax stamp to indicate duty had been paid.

Because the actual marks used by different nations varied significantly, observing the hallmark standard globally became very difficult and so, in 1972, the Vienna Convention agreed that all participating nations would apply a Common Mark to indicate the item had reached an internationally recognized standard. Countries that are not full members of the convention may still act as observers to the actions of those that are, in order to protect the integrity of the system across the world.

The UK have long been leaders in establishing and monitoring standards and the process of Hallmarking, and an example of a typical modern UK mark is below.

From left to right are the makers mark, the fineness (in this case 22ct Gold), the assay office (Birmingham), the year (2016) and the common mark required for international recognition.

Often, the fineness is omitted due to the same information being incorporated into the common mark, but not always. The year is also optional but is almost always included. This is very useful for jewelers who deal in antique jewelry like us at Estate Diamond Jewelry, as it gives us an indication of how old a piece may be. It also lets us look for obvious signs that stones or other parts of a piece have been replaced over time. 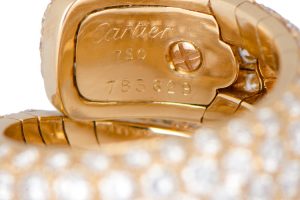 As a world leading nation in the design and manufacture of gold, silver and platinum jewelry, quite why the US has not yet established an official policy on hallmarking is something of a mystery. Makers marks are very common, but hallmarks much less so. Whether a scheme would help with identifying counterfeit goods isn’t clear, but there doesn’t seem to be any kind of principle objection from any party, so we’ll just have to wait and see.

Although traditionally punched directly onto the metal by the maker, more and more producers are now laser etching hallmarks onto their wares. Although much less prone to poor quality marks, laser etching actually wears very quickly on softer metals like gold, and the mark can sometimes be lost to the ravages of time and every day wear. Traditional punched marks go much deeper into the metal and so are much more robust and resistant to wearing.

Hallmarks are a fascinating subject to study, and the relatively small number of marks in use mean it isn’t just a pastime for the expert jeweler. With a little reading, anybody can look at a piece of jewelry and, if it does have a hallmark, can say where and when it was made, the quality of the metal, and even the maker if their knowledge extends that far.