Cushion cut diamonds are a little unusual in the fact that they can actually be quite a wide variety of shapes, as long as all fall within the basic geometric classification of “rectangle”, and all have a slight curve to the edges thereby resembling a cushion. In practice, though, cushion cuts would usually be either square or oblong with non-square cuts having a width:length ratio or around 1:1.15, although this can be extended to 1:1.25 before the stone starts to look a little too “baguette” shaped.

Such liberal interpretations tend to be a more modern trend and, although recent cushion cuts do have a certain freedom when compared to other modern cuts, the further you go back into the history, the more conventional the cut becomes.

The Origins of the Cushion Cut 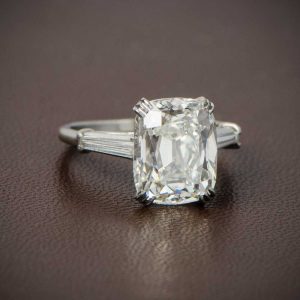 With vintage and, particularly, antique diamond engagement rings, we often see the cut of the center stone being described as old mine, and it is in the old mine cut that cushion cuts have their roots.

The old mine cut was, at its height during the 19th century, the most popular of all cuts, and it wasn’t until the early part of the 20th century that cutting methods allowed more elaborate cuts to be produced and the old mine cut got left behind a little bit and started to be considered a little old fashioned.

Of course, as is often the case, the true beauty of the old mine cut is once again being discovered, and is a firm favorite in the growing demand for vintage diamond engagement rings. The term cushion cut is far more common in modern ring design because the basic old mine cut has gone through several updates and transitions, leading to several variations on the original.

The Old Mine Cut 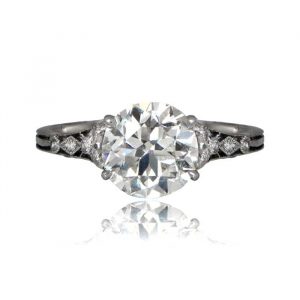 The name “old mine” comes from the fact that most diamonds in the early 19th century came from India, regarded as the old mines in diamond dealer circles, and not from South Africa as is far more common today. Each true old mine cut diamond is unique due to being hand cut, without the benefit of machine-assisted cutting and, although the basic rules of the cut (high crown, small table, large culet) were observed, the nature of hand cutting means that no two are exactly alike.

The original intention of the old mine cut was to use every last ray of light produced by the candles providing the only available artificial light source at the time, so the fire in the diamond could be displayed to its fullest. In hindsight, the skill with which the master jewelers of the time managed this is really quite astonishing. Without machines, often in dark conditions and only their own eyes and the skills they developed over their career to help them, their influence over everything that came after, and the gratitude we owe them shouldn’t be underestimated.

In profile, the old mine cut is very reminiscent of what we see used in logos and other graphic depictions of cut diamonds and is, in every way, a classic diamond cut that lives on 200 years after its creation.

Development of the Modern Cushion Cut 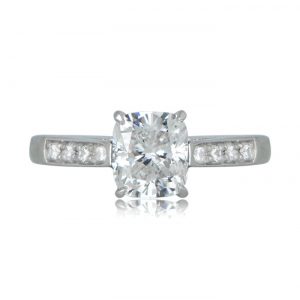 The original old mine cut was – and is – renowned for the fire it produces from the large culet and high crown, and the development of these, along with a slightly larger table, to produce even deeper fiery properties has been such that the range of diamonds which sit within the category of cushion cuts is extensive.

The 58 facets help to improve the clarity quite significantly, and so slightly lesser stones can be used knowing that the resulting apparent brilliance will make the diamond appear to be of higher quality than the GIA certificate would suggest. Changes to the angles of the facets as the crown height and table size changed did nothing to lessen the appeal of a cushion cut, and have proved extremely flexible in allowing craftsmen to lessen the visibility of minor inclusions, still further improving the overall look of the diamond.

The original intention of reflecting candlelight means that artificial light is reflected slightly differently in modern cushion cut diamonds, and is usually outdone by brilliant and other cuts. However, the very desirable upside is that an antique cushion cut or old mine cut diamond produces often kaleidoscopic effects, displaying every color of the light spectrum with exquisite subtlety and grace.

The nature of the cushion cut means that it fitted perfectly into the surge in popularity for Art Deco engagement rings both during the early 20th century and during the Art Deco renaissance of more recent times.

The Many Faces of the Cushion Cut 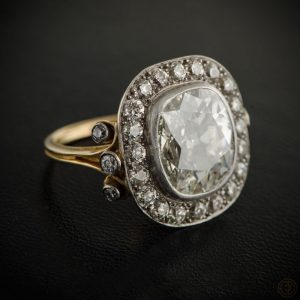 We mentioned earlier that the modern cushion cut has developed several variations of its own, with the two most common being referred to as X Factor and Crushed Ice. Although buying and wearing any diamond is going to be a matter of personal taste, the two variations are really quite different and, in the case of the crushed ice cushion cut, the quality of both diamond and cut can vary widely.

The idea of the cushion cut (and all diamonds, in fact) is to reflect as much light as possible, and a nice crushed ice example will do that. However, it’s not unknown for the crushed ice style to be used to hide less than perfect cutting techniques or lower quality stones, whereas x factor is a lot more consistent in the finished product. Put simply, take expert advice and add this to what your own eyes are telling you.

Really, all cushion cut diamonds, right back to the original old mine cut exert an element of the crushed ice effect because of the way the different elements are combined, and a good example is just a joy to behold. This is why the old mine cut will always refuse to disappear completely, and why the modern cushion cut is still such a close relation.