The Hope Diamond is easily one of the most recognizable diamonds today. Although it was discovered in the 17th century, this diamond still doesn’t cease to impress. Besides the exceptional color, cut, and size, the Hope diamond has a rich history, and many believe it’s cursed.

This article introduces you to the Hope Diamond and discusses its history, characteristics, and worth.

History of the Hope Diamond

Compared to its geologic history, the Hope Diamond has a short history as an object of admiration and human desire. The earliest records show this impressive diamond was discovered in India sometime before 1668. Unfortunately, no reliable data indicates the exact time when the diamond was mined. The first owner of the diamond was Jean-Baptiste Tavernier, a French gem merchant who reported the possession of an “incredible blue diamond” and named it “Tavernier blue.” Tavernier didn’t mention how and where he acquired the stone. The diamond weighed 110.5 carats.

How Much Is the Hope Diamond Worth?

Experts estimate this exquisite stone is worth around a whopping $350 million. This makes it the third most expensive diamond in the world, right after Koh-i-Noor and Cullinan. Koh-i-Noor has a priceless value, while Cullinan’s worth is estimated at around $400 million. Since both these diamonds are white, the Hope is considered the most expensive blue diamond.

Where Is the Hope Diamond Now?

As mentioned, the Hope Diamond has changed numerous owners since it was discovered. Today, this diamond resides in the Smithsonian Institute. Harry Winston, a famous American jeweler and the previous owner of the diamond, donated it to the institute in 1958. The diamond is displayed in the Smithsonian National Museum of Natural History in Washington D.C, at the head of the museum’s gem collection.

In the past, the diamond was displayed at the end of the exhibition, and visitors rushed to get to it. Consequently, they did not pay attention to the rest of the impressive collection. When they noticed this, the employees decided to move it to the front. Immediately seeing the famous diamond intrigues the visitors and makes them wonder about the rest of the collection, encouraging further exploration.

The Hope Diamond has an honorary spot in the gem collection. It’s on a rotating column that allows the viewers to see the diamond from every angle and enjoy its exquisite sparkle.

The Four Times the Diamond Has Left the Museum

Since 1958, the diamond has left the Smithsonian Institute only four times. It traveled to France, South Africa, and New York City.

The first time was in 1962 when the Hope Diamond traveled to France when it was on loan to the Louvre Museum for the exhibition “Ten Centuries of French Jewels.” The Hope Diamond was a “guest” at the Louvre Museum for a whole month. In return, Leonardo Da Vinci’s “Mona Lisa” traveled to the U.S. and was displayed in the National Gallery of Art in Washington, D.C., for almost a month.

In 1965, the Hope Diamond went to Johannesburg, South Africa. It was loaned to DeBeers and displayed at the Rand Easter Show, one of the world’s most popular annual consumer exhibitions.

The third time the Hope Diamond left the Smithsonian National Museum of Natural History was in 1984 when it traveled to New York. Harry Winston, Inc. celebrated its 50th anniversary and wanted to display the diamond.

Twelve years later, the diamond visited Harry Winston, Inc. in New York once again. Unlike the last time, the diamond wasn’t part of a display; it was sent for minor restoration and cleaning.

Does the Hope Diamond Have a Curse? 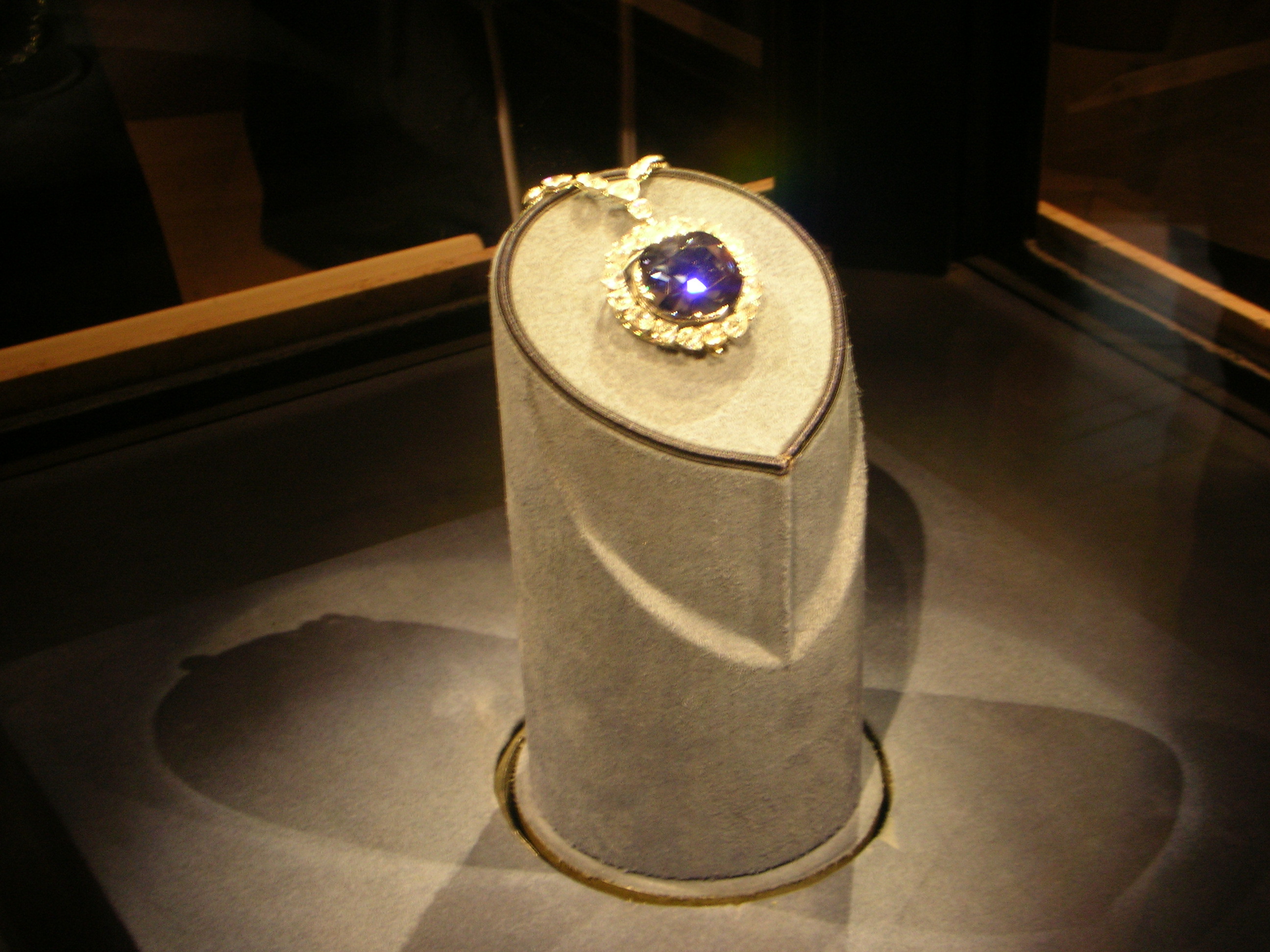 There are numerous stories and legends about the Hope Diamond being cursed. It’s believed that the diamond brings tragedy and misfortune to the person who owns or wears it. In the early 20th century, several newspapers spread the “curse” story, including the New York Times and the Washington Post.

Here are a few stories which “prove” that possessing the Hope diamond results in a series of tragedies.

According to some sources, Jean-Baptiste Tavernier stole the Hope Diamond in India. Soon after stealing it, he came down with a fever and died, and wolves ravaged his body. However, according to other sources, Tavernier died in 1689, when he was 84 years old.

King Louis XIV bought the diamond from Tavernier and had it recut. Since he died of gangrene and all his children (except one) died at a young age, many people believed it was because of the diamond.

Nicholas Fouquet worked for King Louis XIV and wore the Hope Diamond on multiple occasions. He fought with the king and was banished from France. The king later changed his sentence, and Fouquet was imprisoned for life at the Fortress of Pignerol.

Lous XVI inherited the Hope Diamond, and he and his wife Marie Antoinette wore it. Both were convicted of treason and executed by guillotine, and many curse theorists believe it’s because of the diamond.

Wilhelm Fals was a Dutch jeweler who cut the Hope Diamond into the size and shape it has today. According to a legend, his son stole the diamond, murdered his father, and killed himself. Another legend states that Fals died of grief after his son took the diamond.

Simon Maoncharides was a Greek merchant and one of the many owners of the Hope Diamond. He drove his car over a cliff, killing himself, his wife, and his child.

Abdul Hamid II was a Turkish sultan and one of the diamond’s owners. He was known as Abdul the Damned because of the numerous misfortunes, unsuccessful wars, and tragedies during his reign.

Evalyn Walsh McLean was an American socialite who bought the Hope Diamond. According to numerous stories, wearing the diamond came at a price. The heiress first lost her mother-in-law, then her young son died, her husband left her, her daughter died, and she ended up in debt.

James Todd was the mailman who delivered the Hope Diamond to the Smithsonian Institute in 1958. Shortly after the delivery, he was involved in a truck accident that crushed his leg. On a different occasion, he hurt his head. Then, his house burned down. James Todd is believed to be the last victim of the Hope diamond.

Curse theorists claim all these people suffered because they owned or wore the Hope Diamond. However, others claim the curse stories are a marketing trick to enhance the stone’s appeal and mystery. Many newspapers fabricated certain stories and exploited them to increase sales.

The Hope Diamond and the Titanic

Many people believe the Hope Diamond and the diamond from the Titanic are the same. However, this isn’t true. The Heart of the Ocean is a fictional necklace used for filming the “Titanic” movie in 1997; it was never on the real Titanic that sunk in 1912. But the jewel from the movie was indeed inspired by the Hope Diamond.

When the Titanic sunk, the Hope Diamond was in possession of Evalyn Walsh McLean.

How Much Would It Cost to Remake a Replica?

The Hope Diamond is known for its unique, deep blue color that makers have had trouble copying. However, modern technology allows scientists and jewelers to create replicas that look just like the Hope Diamond to the naked eye.

The prices range depends on the material used for the replica. Cubic zirconia replicas cost significantly less than replicas made of real diamonds.

A replica featuring cubic zirconia can cost anywhere between $20 and $1,000, sometimes even more, depending on the other materials. If it’s a high-quality replica, you can expect to pay several hundred thousand dollars for it.

Talk to a Jewelry Expert

If you’re interested in purchasing diamond jewelry but aren’t sure what to pay attention to, Estate Diamond Jewelry can help. We’ve been in the diamond business for more than four decades and have the experience and knowledge to help you make the right decision.

Contact us to schedule an appointment in our New York showroom. If you’re not in New York, you can always schedule a video appointment, and we’ll be more than happy to answer all your questions.