Milan is a city renowned for it’s impeccable taste and style, so it’s fitting that a man who is renowned as one of history’s greatest jewelry artists should have been born and raised there. It’s also appropriate that he chose to open his first store selling vintage Buccellati jewelry right in the heart of the city.

Born in the Adriatic coastal town of Ancona in 1891, Mario Buccellati didn’t take quite so long to build his own “town”, and began business by opening his first boutique store in 1919, at the age of 28, on Largo Santa Margherita, after a 16-year apprenticeship at the respected Beltrami & Beltrami jewelry company.

It didn’t take long for the Buccellati name to become known as a place to buy vintage Buccellati rings and jewelry of the very highest quality, with its bold and instantly recognizable signature designs. 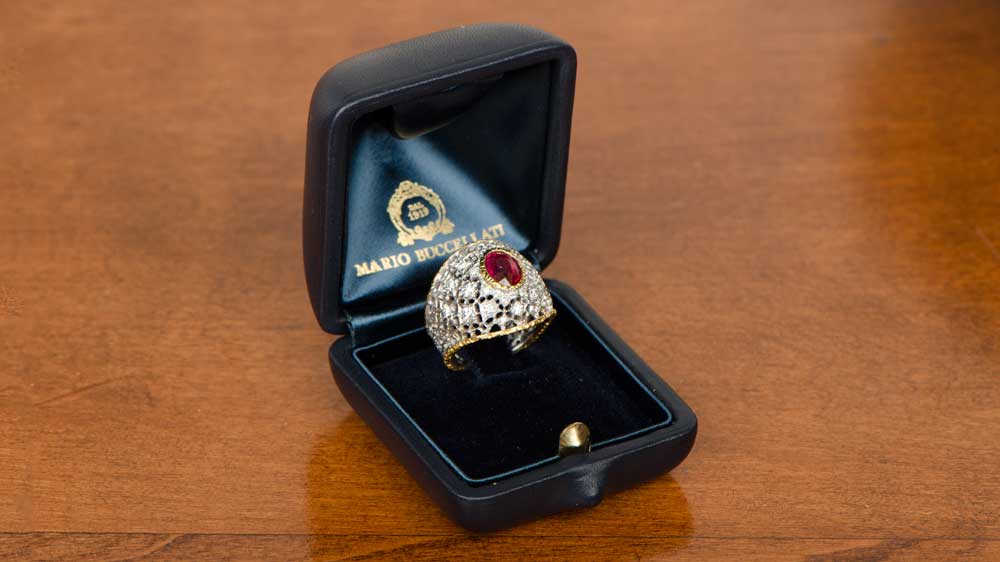 A rare Ruby Buccellati Ring from our collection. Circa 1970.

Legend has it that, during a show in Madrid in 1920, Mario hurled an expensive, one of a kind, compact through an open window after a customer requested a discount whilst shouting “I am not a tradesman!”. The outburst did the trick, as visitors to the show flocked to see the wares being sold by “the shouting man”. As a result, every piece of vintage Buccellati jewelry sold, and led to Buccellati being offered his own exhibition which drew visitors from all over Europe, including the Spanish royal family.

His friend, poet Gabriele D’Annunzio became a close friend and ordered so many pieces that the Buccellati company often struggled to keep up with demand.

Although Mario had been the driving force behind the early success of the company, it was his eldest son Gianmaria who, after joining the company as a 15 year old designer in 1944 set the company onto a period of massive expansion and true global recognition. The traditions of the Bucellati designs – big, colorful and bold – were expanded upon together with the ongoing refusal to be drawn into fashions and trends, instead preferring to design from the heart. 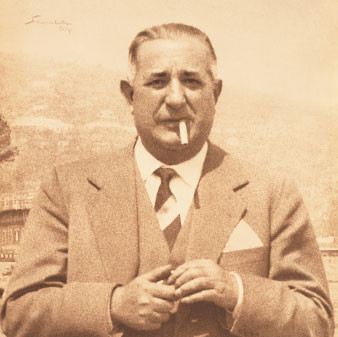 It is this attitude which brings generations of the same family back to Buccellati time and time again when they are looking for something both different and beautiful in equal measure. Big stones, often in colors not considered desirable by the conventions of the industry feature often in vintage Buccellati rings simply because the designer likes the look. This freedom has kept Bucellati at the very top of their profession and continues to this day.

The success of the Buccellati name became so great that new stores were opened in Rome in 1925 and Florence in 1927. Although sold worldwide, the company remained purely an Italian affair until 1951, when Mario Buccellati became the first Italian jeweler to open a store on Fifth Avenue in New York.

The Buccellati name, by this time, meant more than just Mario. Four of his five sons had followed their father into the family business, with Gianmaria taking over the company upon the elder Buccellati’s death in 1967. Despite this great loss, the company continues its global expansion, which included a second store on 5th Avenue. Gianmaria also became a legend in his own right within jewelry design and production.

Although part of the company was sold off in 2013, the Buccellati brand is still very much a family affair, and is now into its 4th generation of designers that carries the name. From reasonably humble beginnings, vintage Buccellati rings has garnered a reputation for quality and precision which rivals any in the world, and that doesn’t look like changing any time soon.

To view our entire collection of rare signed rings, including our Buccellati Rings, click here.