To the untrained eye, a new and old diamond of similar cuts may look very similar. On closer evaluation, however, the age of the diamond tells us a lot more about how it came to be the shape it is today. Modern diamond cutting is done almost exclusively with lasers, as the high level of accuracy allows the maximum profit from a rough stone. But lasers are a recent phenomenon. So how did diamond cutters manage before the advent of such modern techniques?

This question is particularly relevant when we think about the massive boom in demand for diamonds during the early to mid-20th century. The pressure on cutters to keep up with the market’s supply needs was considerable, which drove several innovations in cutting techniques, and the introduction of the motorized circular saw in the early years of the period opened up new possibilities for different cuts which also produced much less wastage.

It is assumed that only a diamond can cut another diamond but, whilst this is true in part, it doesn’t tell the whole story. 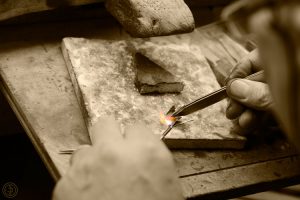 Diamonds are the hardest precious stone as yet discovered, rating the maximum 10 on the Mohs Hardness Scale, but they don’t actually rank so high on the toughness scale. Hardness is a measure of how prone the stones are to scratching, whereas toughness is how prone the stones are to fracturing or chipping. Anybody who has suddenly realized their “indestructible” diamond has a chunk missing from it will testify that the two are very different things.

Because of the mineral composition of diamonds, they have 4 natural cleavage directions. These are planes of weakness through the stones and are easily identified by an experienced diamond cutter. Each cleavage plane allows the diamond to be quite easily split without cutting, when pressure is applied appropriately to the correct area. Because of these inbuilt planes, the split is usually extremely clean and allows multiple cut diamonds to be extracted from a single rough stone.

This cleaving technique, which has been around for centuries, still plays a significant part in diamond cutting today and is the first step in any process towards producing a finished diamond, along with bruting, cutting and polishing. All of these steps used to be done by hand, but all have now been mechanized in part, with skilled workers employing various tools to speed up the process and to be able to reproduce the same quality with each stone.

After the cleaving, “bruting” roughly cuts the individual stone into something approaching it’s final shape, ready for the facets to be cut and the final polishing to be done. It was realized quite early that two diamonds can work against each other and perform a sort of mutual bruting where each diamond takes the edges off the other, halving the time needed to complete this stage in a 2-for-1 type of situation. This is the process that has remained most unchanged since the days of vintage diamond cutting, although high speed wheels are now used to shorten the process as much as possible.

Once the basic shape of the diamond has been achieved, it goes through 2 stages of polishing to achieve the final, marketable stone. With vintage diamonds, this was done almost exclusively by hand, and required a breathtaking level of accuracy. The first polishing process created the basic platform for the desired finished cut by creating the pavilion mains, crowns, culet and table facets. After this, the “brillianteer” would the remaining facets according to the cut, before the finished stone was inspected for accuracy and quality. 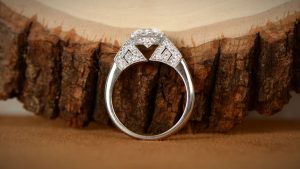 Laser polishing is starting to become more common, although most polishing is still done by craftsmen using a polishing wheel and all diamonds require finishing by hand. The methods used from the peak period for vintage diamonds may have changed, but the stages required remain almost unchanged in nearly a century.

Although we have now probably reached the pinnacle of cutting accuracy with modern techniques, the long-desired art of cutting diamonds is worth preserving, with the best cutters being able to produce finished stones almost indistinguishable from a laser cut version of the same stone. However, there will always be a slight “roughness” to a hand-cut diamond under close inspection which lifts it out of the ordinary and into realms of greatness by skills that risk being lost as time goes by.

It is this hand-made naturalness which makes vintage and antique diamonds so special, and which mean the demand for them will remain.

used this to write my term paper about rings. Thanks alot!

The craftsmanship put into crafting a ring is so precise! Only the experts can handle such task. You guys do a great job!

Step by step, this blog shows us the expertise put into each of their jewels!

Cleaving is the most tedious

Many individuals have, like uncut diamonds, shining qualities beneath a rough exterior.

Its a time consuming process. No wonder they are so expensive!!!

Well written. Clearly shows the prestige in a perfect diamond.

Diamonds are very tough and almost impossible to break