Unlike a number of newer celebration days in the calendar, wedding anniversaries have always been celebrated with a particular gift. For example, the first anniversary is traditionally associated with Paper, and so a gift made of paper is commonly given. As time has passed, although the anniversaries have retained their traditional associated names, the gifts given have changed significantly.

Jewelry is by far the most common gift given regardless of the traditional gift linked to the number of years. It is true to say that the more significant anniversaries (eg 25, 40, 50 or 60 years) are often still honored with the appropriate gift. Silver, Ruby, Gold, and Diamond respectively. In truth, any piece of jewelry is always welcomed to celebrate any anniversary. 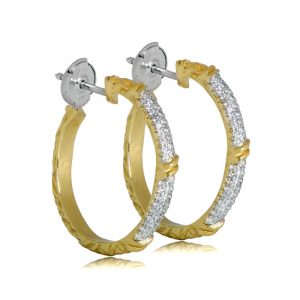 In keeping with their relaxing of traditional gift-giving, no single piece of jewelry dominates the practice. Indeed, cocktail rings and earrings containing a variety of different gemstones are very common gifts, regardless of the numerical anniversary being celebrated.

As we’ve said, although some anniversaries are often closely observed, the advantage of their being no hard and fast rules on the type of jewelry given means that gifts ranging from diamond earrings all the way across the jewelry spectrum to a coral cocktail ring carry the same significance, a commemoration and a celebration of the longevity of marriage.

Coral is a good example of the use of a stone which doesn’t actually have a particular anniversary attached to it. It still makes for a great and rather unusual gift. For those interested, coral actually used to signify 35 years. It was usurped in more recent years by Jade. This is a great example of how the old tradition has become much more flexible as time has gone by.

One of the reasons that cocktail rings have become so popular as anniversary gifts is that they are, by definition, an occasion (as opposed to occasional) ring. Both ring and the reason behind its appearance on the finger are there to be flaunted, and it allows the opportunity for more unusual stones such as chalcedony (a quartz/moganite composite) which is found in many different colors, often with contrasting bands or patterns within the finished stone. This freedom of expression given to designers means some amazing rings have been produced throughout the years.

It also means that diamonds which might otherwise have been consigned to the “others” pile of stones can suddenly become the center of attention. Although the clearest, whitest diamonds are preferred in engagement rings, colored diamonds such as the highly unusual fancy green diamond make their mark as cocktail rings given for anniversary gifts and need no supporting cast to look stunning. 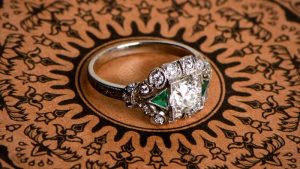 Earrings are perhaps a little more conservative in their design, given the slightly more restricting nature of their use but, even then, to keep up with their finger-worn brethren, colored diamonds and unusual stones like citrine allow the wearer to be just that little bit different, and to stand out from the crowd.

Anniversaries give the perfect reason to buy a beautiful cocktail ring or an amazing pair of earrings. When flexibility is built right into the jewelry buying process, then why not exercise it? Throw in some individuality and a touch of bravery and, suddenly, personality becomes a huge part of choosing jewelry.

I buy anniversary gifts for my wife from Estate every year all the way from Milano.

My husband took me to Times Square for our anniversary in which he gave me a cocktail ring! very romantic 🙂

I love my wife. Id buy any ring for her and estate diamond really helps me with that 🙂

Beautiful gifts to give to your loved ones!

My friend got a cocktail ring for her anniversary present!

The coral cocktail ring looks stunning! I got it for my wife last year haha

My boyfriend surprised me with a vintage ring! Absolutely in love with it!