Often, cabochon stones are categorized alongside stones that have been cut and faceted, but this isn’t strictly accurate. The word “cabochon” comes from the French word “caboche”, meaning head, and this is a clue to how the finished stone usually looks. A cabochon is a stone that is polished to a finished shape, rather than being cut, and suits some precious and semi-precious stones more than others. In most cases, the finished stone will be elliptical in shape, and have a flat back.

Prior to the 14th century, all precious and semi-precious stones were polished into cabochons. It was only after this time that the means to produce fully cut and faceted stones was developed. Although some cutting does occur when creating a cabochon stone, this is purely to isolate the area of the intended final product, and thereby minimizes the polishing required to achieve the finished shape.

Softer stones were also sometimes surface-carved after polishing, a practice which largely died out as faceting became more popular.

Can Any Stone Be A Cabochon? 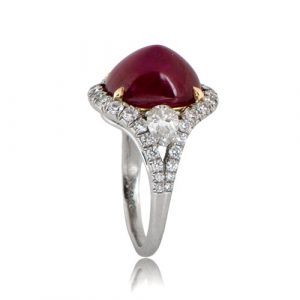 Although by no means entirely restricted by the type of stone, polishing does suit those which are made up of slightly softer material or which are translucent (semi-transparent). Fully transparent stones, such as diamonds, suit faceting very well, because of the desirability of light reflection and refraction, and so are rarely seen as cabochons. The reason hardness is a factor is that softer stones can quickly dull when suffering from micro-scratching caused by the silicon dioxide contained in the dust floating in the surrounding air, and faceting magnifies this dulling effect much more than cabochons.

Because of this, stones rating lower than 7 on the Mohs Scale of hardness are rarely faceted and almost always polished into cabochons.

Precious stones such as sapphires, which may contain star-shaped inclusions, are also very popular as cabochons as the original cut will be made around the star, so that the polishing can then leave the inclusion at the crown of the shape in order to show it to its fullest effect. Were the sapphire to be faceted, the star would likely be lost across several of the facets themselves, and lessen both the beauty and the value of the stone.

Lower grade sapphires, emeralds and rubies are also well suited to being cabochons, as the lower quality is less pronounced than would be the case in faceted stones. This creates a market that may not otherwise exist for stones would might ordinarily be considered unusable.

The main reason why an ellipse is chosen for the vast majority of finished cabochons is that the human eye has great difficulty in seeing minor imbalances in non-symmetrical shapes, but can easily detect even the slightest imperfection in circles. Ellipses are also particularly well suited to necklaces, brooches, and even earrings where the elongated appearance promotes the piece well. Again, though, this choice is made with aesthetics in mind and, technically, a cabochon can be any shape whatsoever.

It is also thought that the human brain interprets an ellipse as being heart-like, and so makes a subconscious connection to the emotion of love. This makes cabochons attractive for non-practical reasons that we are not aware of when browsing, and so becomes something of a marketing tool for the dealer!

A well-polished cabochon can be a strikingly beautiful thing, especially when stars or other inclusions are perfectly positioned within the stone. The process also allows very unusual multi-stone jewelry pieces to be created, without having the often slightly aggressive nature of one made entirely of faceted stones. They are also great for those working to a tight budget, or just looking for something to complement an outfit or specific event.