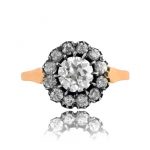 The halo design is almost as old as the stone-set ring itself. In addition to the design element of the halo, the primary motive of the halo was to expand and magnify the effect of the center stone. A large percentage of the Georgian Era Rings and Victorian Era Rings (that are still available) are adorned with a halo around the center old mine cut diamond.

Though the halo wasn’t used as much during the Edwardian Era, it would later be more prominent in the history of engagement ring styles. The halo had a tremendous resurgence during the Art Deco Era. During the Art Deco Era since it was an easy method for a jewelers to take the ring that he was creating and enforce it with a strong and bold look. 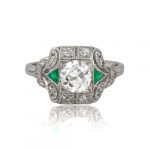 The scroll motif, like the halo is so characteristic of antique engagement ring styles. The scroll can sometimes be two dimensional openwork filigree, but usually the scroll doesn’t just roll into a circle but also moves upwards or downwards.

The scrolls will also usually balance each other out and so it will be common to see scrolls in pairs. Scroll motifs were very prevalent during the Art Deco Era. 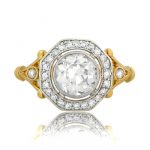 Though this style didn’t really continue past the Edwardian Era, it remains a very distinct feature of that glorious stage of jewelry.

The Vine and Floral Motifs 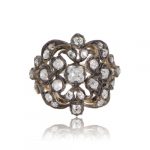 The vine motif, along with leaves, serpents, hearts and flowers was very fashionable throughout the Victorian Era, and is found in many rings that have survived. Though subtle elements of the vine and floral motifs have continued throughout the other eras, the pure form of these motifs itself aren’t as mainstream as they used to be.

In the history of engagement ring styles, ornamental and nature inspired design did have a resurgence with Art Nouveau, but it took a much more modernist direction away from the Victorian-era style. 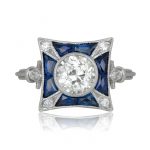 Sapphires have been a strong part of old fashioned engagement ring settings for a millennia, but during the Art Deco Era their position as the primary accent in engagement rings became reinforced. Using sapphires along the shoulders, in the gallery, and as a halo still remains extremely popular today.

The sapphire, with its bold and prominent blue color, was the perfect stone to help assist the Art Deco Jewelry to make a strong statement. 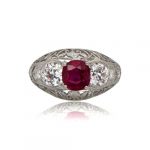 Whether the stones are diamond or not, the three stone engagement ring is one of the most classic settings in the history of engagement ring styles. The three stones usually tend to be diamonds, but sapphires, rubies, and emeralds are not uncommon. The stones can also be set bezel or prong, touching or separate, the center one larger or equal sized.

Which style is your favorite? Which styles would you add to this list? Tell us in the comments below!