When we talk about vintage sapphire engagement rings, it’s all too easy to give diamonds all of the attention. However, the history of the sapphire appearing on engagement rings is both fascinating and intricate. The word sapphire is derived from the Greek “sappheiros” meaning “blue stone,” and it is the stone’s unique color profile that has captivated and mystified jewelry lovers for centuries.

The History of Sapphires

Despite its Greek etymology, the history of the sapphire is believed to begin in Sri Lanka. As Sri Lanka has historically been a leading producer of sapphires, these stones have long been a part of the national culture—in fact, they have likely been a part of the Sri Lankan gem trade for over 2500 years. Sri Lanka is also (arguably) the only place in the world that is home to a highly prized, orange and pink sapphire called padparadscha, which means “lotus flower” in Sinhalese.

The popularity of sapphire stones in engagement rings has waxed and waned throughout history. They first grew in popularity during the 13th century, when it was widely believed that the color of the sapphire in a ring would fade if it was worn by an impure or unfaithful person. Based on this belief, Pope Innocent III instituted a mandatory waiting period before marriage in order to see whether any color fading occurred.

There was a resurgence of sapphire engagement rings during the 14th and 15th centuries among royal families due to the belief that sapphires symbolized love, truth, and commitment. That conviction was then solidified in the 18th century by writer Mme de Jenlis. Her fable, ‘Le Sapphire Merviellence,’ linked sapphires to fidelity, creating a fresh demand for sapphire engagement rings. 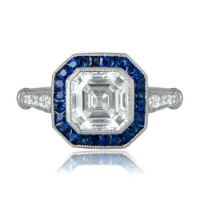 It was in the beginning of the 20th century, during the Art Deco period, when sapphire rings grew popular once again. Diamond engagement rings accented by a halo of sapphires or other colorful stones were a popular trend during this time.

Since its popularity boom in the 1920’s, the history of the sapphire has repeated itself, and sapphires are once again the center stone in many engagement rings, including the famous engagement ring worn by Princess Diana.

The Different Colors of Sapphires 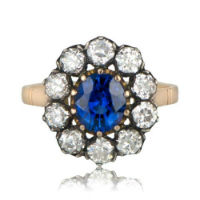 The most common color for sapphire vintage engagement rings is blue, but there are many other colors of sapphire including yellow, green, pink, and orange. The overall color of a sapphire is determined by trace elements of other minerals within it. Traditional blue occurs when the sapphire is naturally laced with titanium. Yellow sapphires are created when iron is present in the stone, while ever-rare pink sapphires have traces of chromium.

Pink sapphire engagement rings are among some of the examples that the sapphire jewelry that is treasured among collectors.

Other than its connection with purity and the variety of colors, the history of the sapphire has another unique aspect: imperfections. While imperfections in diamonds are flaws that decrease the value of the stone, imperfections in sapphires add to their value and beauty. In fact, jewelers sometimes attempt to bring out the flaws in a sapphire using a special heating process to create a superficial ‘star’ effect.

For more information on this fascinating stone, see our Definitive Guide to Sapphires. To learn about the sapphire vintage engagement rings we carry, explore our unique collection today.