Many of the subjects we discuss regarding engagement and wedding rings have their origins in the quite recent past as, although the giving of one or the other is an ancient tradition, the circumstances for them today have changed somewhat over the past few hundred years. Indeed, until those recent historical times, it was quite common for only a single ring to be given in order to indicate that a woman “belonged” to a particular man. 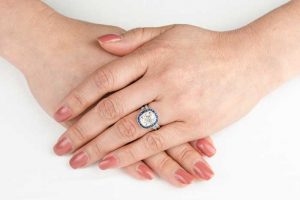 This was especially common among the ancient Romans, who also added a small key to the ring to emphasis the ownership.

One variation popular in Europe until about 500 years ago was that both parties would wear one half of an interlocking ring set upon their engagement, where the man’s half would be placed onto the woman’s finger during the wedding ceremony, thereby creating a single, double-banded ring. Although this practice faded out in the late 1600’s, early 20th century marketing campaigns attempted to make dual engagement rings a new tradition, but were unsuccessful, settling instead for the exchanging of distinct wedding bands as part of the ceremony.

So, now that two rings are common, at least for women – one for the engagement and one for the wedding, in which order should they appear on the finger, and why?

You might be forgiven for thinking that the order they are given and received should be the order that they should be worn, with the engagement ring nearest the hand, then the wedding ring. In most cases, though, you’d be wrong.

Unless there is a compelling reason to wear them differently, the wedding ring will always be closest to the hand, with the engagement ring coming next. 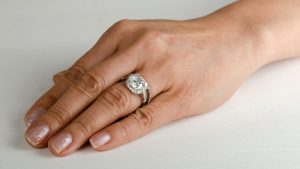 This occasionally causes a dilemma for brides when it comes to the wedding day.

Should they take the engagement ring off before, or just as the wedding rings are about to be exchanged?

The truth is that it doesn’t really matter. Common sense says it’s probably wise to put it somewhere safe before the wedding even starts, but it’s a personal choice. The wedding should follow whatever is easier and more practical for the bride.

Why does the Wedding Band goes on first?

So why should the wedding ring be the first on the finger when it’s the second to be presented? It’s actually nothing more complicated than for reasons of practicality. 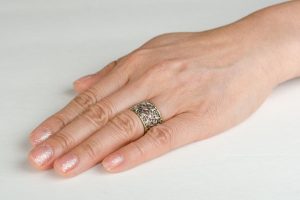 Just to complicate things slightly, we can add in an eternity ring to the mix. Eternity rings are a very modern invention. In fact, the concept was devised in the 1960’s by creative diamond merchant De Beers.

Because of this, there’s no real tradition attached as to how and where – or even when – eternity rings should be worn. If they are to be worn on the same left hand ring finger as the others, then the eternity ring should be the last on, as it doesn’t truly carry the same significance as the wedding or engagement rings. However, there’s nothing to say the eternity ring can’t be worn on a different finger altogether, and many women choose to wear it on the corresponding ring finger of the right hand.

As with most traditions, things do change over time, and modern cultural influences do allow more freedom in just about anything, including the wearing of jewelry. Our advice is to go with what works for you, and what works to show your rings off to their very best.

History, as they say, isn’t what it used to be.