Like many of the great French jewelry ateliers, the Boucheron company was formed in the mid-19th century. Boucheron was the first jeweler to move into the legendary Place Vendȏme. Units at number 26 being chosen due to Boucheron believing it to be the sunniest location in the square. All the better for the pieces in the window to capture as much light as possible.

Although beginning far from the more modest initiations of other jewelry houses, Boucheron still had to prove the worth of his creations. His skill as a designer, and his eye for quality during the overseeing of his craftsmen. This meant that Maison Boucheron quickly came to the attention of many of Europe’s prominent families. He also gained a lot of fame through his awards won at global exhibition events.

In 1888, Frédéric Boucheron made a gift to his wife of a necklace which incorporated a snake in the design. Snakes are symbols of protection, and Mme Boucheron always wore the necklace when her husband was away. The snake symbol has remained central to the Boucheron philosophy to this day. It is considered something of a talisman for the company.

In 1887, an auction took place of the French Crown Jewels. This auction was a bid to allay fears of a return to the royalist past. Frédéric Boucheron was the only major French dealer in attendance. He managed to acquire a total of 31 diamonds, including two of 16 and 18 carats, respectively. He also purchased a diamond belonging to the Empress Eugénie. Despite rumors of who had commissioned Boucheron to purchase the much sought after stone, he had bought it to set into a ring for his wife. The auction and Boucheron’s success there led to a further increase in demand for pieces produced by his workshop. He soon needed to move to the larger Place Vendȏme premises in 1893.

By 1900, the Boucheron company was firmly established as a leader of the Art Nouveau movement, using previously unheard of combinations of precious stones and other materials, as well as pioneering the use of more unusual elements such as onyx, ivory, and bronze. It is believed that Maison Boucheron created the first Dragonfly brooch in 1903. This design is still highly symbolic of the Art Nouveau movement. 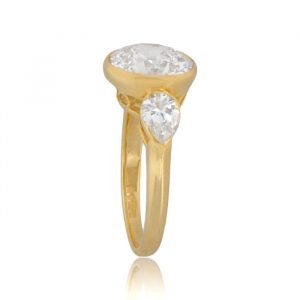 Frédéric Boucheron died in 1902, and the company was passed down to his children, notably Louis, who kept up his father’s well-established practices and high standards. A keen proponent of the emerging Art Deco movement of the time, Louis also oversaw the expansion of the company overseas. Boutiques opened in Moscow, London, and New York.

Boucheron in 20th Century and Onwards

Throughout the 20th century, Maison Boucheron remained one of the most prominent suppliers of jewelry and precious stones. Many of the world’s royal families trace their jewelry to Boucheron. Louis Boucheron himself often acted as a consultant to prominent regimes to assist in the appraisal of jewelry collections that had been acquired, often over centuries.

Following Louis Boucheron’s death in 1959, the company still remained firmly as a family-owned business until the mid-1990s. Schweizerhall Corporation purchased the company and then sold it onto Gucci in 2000.

Expansion continued. The company now have 34 boutiques around the world, all selling creations inspired by the founder of the company.

Boucheron still remain one of the most influencial jewelry comapnies in the world.