Engagement rings are bigger, brighter, bolder and usually much more expensive than wedding bands, so they must be better. But are they really? And what does “better” even mean in this instance? Actually, as we’re not really comparing apples with apples, the comparisons can be weighted either way depending on your viewpoint. 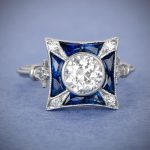 Nominally, of course, engagement rings and wedding bands are inextricably linked by the sanctity of marriage, but they are surprisingly different when you drill down to what they are and what they mean. Physically, emotionally – even morally – different to the point where they have all too often ended up represented by polar opposite values, just what is the purpose of the two ultimate demonstrations of eternal love and commitment?

Engagement rings, as we’ve said, are physically beautiful, oozing craftsmanship and demonstrating an amazing attention to detail. They also bring an emotional response as great as any outside witnessing the birth of a child or a World Series win on Chicago’s north side. They symbolize a new era in a relationship, a second chapter of the story and a promise of unity.

But therein lies the rub, sort of. As stunning and gorgeous as engagement rings are – and they truly are – the entire history and culture surrounding them is one of little more than a promise. Engagement rings have been subjected to many debates regarding their origin, but the smartish money is on the Romans first using betrothal rings as a sign used by men to discourage others from looking too approvingly at their wife. Through the ages, this custom split into two, and engagement rings developed into the bejeweled entities we now know.

As the look of these betrothal rings changed, so did their purpose. From there being a single ring with a single aim, the developing ceremony surrounding marriage became the primary ring-giving purpose and the tradition started where men would present gifts to the woman they loved as a promise of marriage in the future. In time, this became the engagement ring. 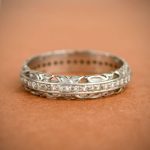 Of course, following on from that, what was previously just a ring demonstrating ownership evolved into the wedding band we know today. The fundamental difference between engagement and wedding rings is one of intent versus confirmation. The presenting of an engagement ring is the intent, and the placing of the wedding ring is the commitment to remaining together for life. It doesn’t always work out that way, sadly, but it can be argued that the wedding ring, because of that next level of immersion in the relationship, is the better of the two.

Obviously, there is no real “better” of the two, with both being a wonderful demonstration of love and commitment between two people, in their own right. The fact is that both engagement rings and wedding bands are perfect for what they do and mean. We can, technically, have one without the other, but why would we want to?

Hmm I like my wedding band better than my engagement ring

Both are beautiful rings 🙂

Wedding bags are a strong way of informing that she is yours. There still isn’t commitment through the engagement ring.

it all depends on the occasion!

That is such a beautiful wedding band! I love everything EDJ has to offer!