The Edwardian era is something of an anomaly both culturally and literally. Named for King Edward VII of England, the period officially commenced in 1901 and should have ended by 1910 on Edward’s death, but is generally used for the period up to 1915.

Click here to see our collection of Edwardian Engagement Rings.

This short time-span puts the jewelry designs of the time firmly within the realms of the Art Nouveau movement, and thereby predating Art Deco, but vintage engagement rings and other pieces of the time contain elements of both, leading to a rather curious mix of both the romantic and the industrial influences that were visible everywhere. 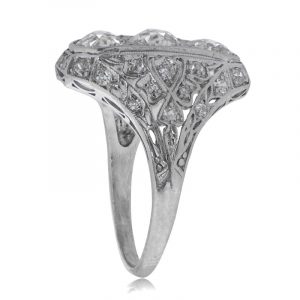 Even modest engagement rings of Edwardian times weren’t spared the full force of a world which was undergoing massive transition. Without quite shaking off the gentle curves, swirls and floral designs of Art Nouveau, Edwardian jewelry epitomizes the transition into Art Deco, becoming ever more elaborate in both design and construction.

During a period in which the growth of personal wealth was significant, rings, brooches and necklaces would often contain 6 or more different jewels, reflecting the trend for displaying one’s wealth as publicly as possible.

Despite firmly sticking with the “more is more” principle when it came to the content, as part of the transition from romantic Nouveau to industrial Deco, Edwardian jewelry did see a more muted application of color from that previously used.

The reds, greens, yellows and other colors were suddenly much less pronounced, at times leading to almost monochromatic designs. This less extrovert style coincided with the introduction of new, improved tools and techniques for cutting diamonds, which encouraged their use and accelerated the rise in domination of the platinum/diamond domination in engagement rings. This seemingly more conservative approach to design wasn’t completely effective, though.

What was lost in color was soon made up for in complexity. Without doubt, the biggest addition to the Edwardian ring maker’s armory was the rediscovery of the ancient art of filigree. Jewelry incorporating filigree work had already existed for thousands of years, but had gradually fallen out of favor with ring designers as gemstones like diamonds and sapphires became more readily available.

Edwardian engagement rings, in particular, were used to revive this ancient method of decoration with fine strands of gold, silver and platinum all being used to add what often seemed like almost impossible decoration. 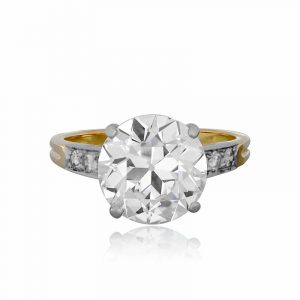 When viewed today, rings that were produced at the height of this rush to demonstrate the skills of the maker often have an almost Gothic quality, such is the degree to which filigree was applied. When used in moderation, however, the filigree on a diamond engagement ring certainly serves to enhance the piece, and has remained a popular element in modern ring design.

Once the Edwardian era had ended, and Art Deco had begun in earnest, what was left of the Art Nouveau movement quickly faded away. Engagement rings quickly completed the move to sharp corners and aggressive angles in the cut, and the next few years saw the Asscher and other cuts become the de facto choice for ring manufacturers, but Edwardian fashion leaves an unmistakable legacy.

Whilst here may be debates about the intent and origins of some pieces, Edwardian jewelry – and engagement rings in particular – are unmistakable. It may not be so obvious to a casual onlooker as to why an Edwardian engagement ring is different, but different it certainly is.

To see some of our Edwardian Engagement Rings click here.