Understanding the Different Types of Beryl

Beryl is a mineral composed of beryllium aluminum cyclosilicate, and gets it’s name from the greek beryllos which broadly interprets as “precious blue-green color-of-sea-water stone”. This interpretation is something of a giveaway as to what the more commonly used names for beryl-composed gemstones might be. 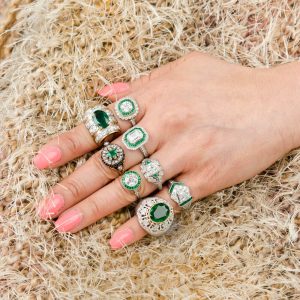 By far the most recognizable type of beryl is emerald, with aquamarine coming a reasonably close second. Other colors are also sometimes found, such as blue, yellow, white, and the rarest of all, red. The color is determined by the level and types of impurities that make their way into the beryl during its formation.

Most precious gemstone deposits are fairly localized, and found in reasonable size in only in a handful of places around the world. Beryl is slightly different in that it is found across all continents, as it is closely associated with tin and tungsten ore deposits. Both metals occur widely around the world, which makes the theoretical chance of finding nearby beryl crystals much higher although it is by no means certain. Being found in a wider range of areas than most precious gemstones doesn’t mean good crystals are easy to find, however, nor does it mean that what are found are gemstone grade. Indeed red beryl, already rarely found, produces very few gem grade crystals that can be worked into polished stones. 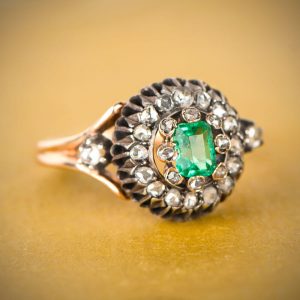 With a name literally derived from the greek phrase for  “green gem”, it’s no surprise what the dominant color of emerald is. Although the colors of an emerald can vary from yellow-green to blue-green, the green hue must be present to be classified as an emerald. The green itself is caused by the presence of chromium or vanadium, and each stone is graded between 0% (colorless) to 100% (opaque black), with a tone of around 75% being the most desired level, assuming the stone also carries a high degree of transparency.

Emeralds are usually quite highly included, that is to say they have flaws within the stone. Whereas diamonds are graded using a 10x loupe, to do so with emeralds would result in almost all stones being graded quite poorly. Because of this, emeralds are always graded by eye. Any stone with flaws or inclusions not seen by the naked eye would therefore be classed as flawless. Such a method is unusual among precious stones, and is testament to the rarity and desirability of emeralds that such concessions are made.

Because inclusions in a stone can reach the surface, most emeralds are treated with special oils to fill potentially devastating surface cracks. This is an accepted practice within the emerald industry, and doesn’t prevent grading being done. However, non-treated stones will always command a much higher price than treated stones of the same quality. 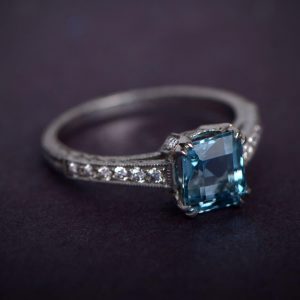 Aquamarine is often unfairly considered to be the poor relation to emerald, as they are an almost identical chemical composition, with only the trace elements which determine color being the difference. It is actually the relative abundance of aquamarine, compared to the relative rarity of emerald, which makes the difference in price that we see.

Anybody who has ever grown hydrangeas or rhododendrons in their yard may be aware that soil composition will determine the color of the flowers, with alkaline soil producing red flowers and acid blue. The way to get blue flowers in alkaline soil used to be by putting iron filings around the base, and it’s a similar chemical disturbance which causes the blue of aquamarine.

Inclusion of both ferrous (dual-iron compounds) and ferric (tri-iron compounds) elements are what give aquamarine it’s deep-blue hue, with iron(II) producing the light blue and iron(III) providing a golden-yellow hue which serves to deepen the color. Aquamarine will always be blue, with the level of iron(III) determining just how blue it will actually be.

Unlike emeralds, which are often heavily included, aquamarines are commonly flawless, with inclusions being quite rare in the stones extracted. What aquamarine does have in common with emeralds is that they are treated – this time with heat – to improve the color. Also as with emeralds, non-treated and treated stones of the same quality will fetch very different process.

Quite unusually for gemstones, aquamarine will lose color with constant exposure to light, although this can usually be recovered with irradiation.

Aquamarine also suffers from imitation stones sometimes being sold as a genuine product. The biggest culprit is topaz, a much cheaper mineral which has very similar physical and visible properties to aquamarine, and is the best reason for only using a reputable dealer for gemstone purchases.

Just as in aquamarine the presence of the iron(III) compound produces the golden-yellow needed to deepen the blue color produced by iron(II), so the tri-compound can be found as the only presence in some types of beryl. As might be expected, this produces a stone with a rich golden color, and is also usually flawless.

Beryl in its pure form is completely colorless. Colorless beryl, however, isn’t usually very pure as color inhibiting compounds are often found in the beryl composition, and such stones are usually referred to as Goshenite. As a result, Goshenite is considered less desirable than other forms of beryl.

Red beryl, as we’ve said, is the very rarest type of beryl, and is found in very few locations across North America, primarily in Utah. The red color is caused by the presence of manganese (MN) ions. The higher the level, the redder the stone. Pink or pale red beryl is usually called Morganite, and includes MN2+ ions. True red beryl gets its color from MN3+ ions, and so is given a separate classification. Red beryl is a slightly more towards orange on the color wheel than a ruby, and so has a slightly different tone.

Beryl is one of the most wonderful of all gemstone minerals, simply for the variety of colors it produces. Whether you’re team green, team blue or even team red, beryl will always be a favorite.