The Definitive Guide to Rubies July 20, 2016 – Posted in: Jewelry Blog

As far as precious gemstones go, rubies are quite unusual in that they acquired their own classification despite really being a subset of another stone. What we know today as a Ruby is, in fact, a red Sapphire.

Rubies are usually to be found in a broad area encircling the earth, generally between the tropics of Cancer and Capricorn. Occurrences of any rubies outside of this are unusual, but not unknown, with large deposits found in Macedonia and Greenland and occasional small deposits scattered across North America.

South East Asia is particularly rich in deposits of corundum, the element of which a Ruby is made up. This region is rich is Sapphires of all colors but is particularly known for the excellent quality of the Rubies mined here. Although, in Western culture, Rubies are not as highly prized as Diamonds, many Eastern cultures prefer the use of Rubies and Sapphires because of their obvious beauty.

History of the Ruby 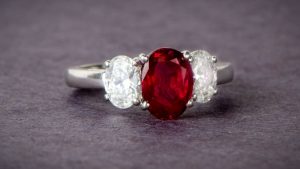 There are records of Rubies being traded as far back as 200 BC along the Silk Road heading west out of China. The tradition of Rubies in Asian culture continues to this day, with the stone still held in very high esteem. Rubies were often used to decorate the weapons of noblemen in China, or were included in the foundations of new buildings to bring good luck.

Many areas in South East Asia are still rich in Ruby deposits, with stones from Thailand and Myanmar (Burma) being particularly sought after and treasured.

The Color of the Ruby 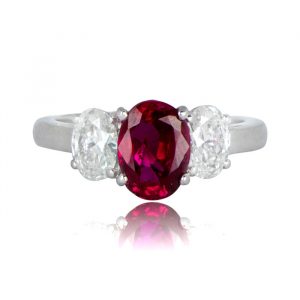 As we mentioned above a Ruby is, technically, a red Sapphire and is made up of the element corundum. Pure corundum is absolutely colorless. Color changes occur when the chromium and aluminum atoms within the stone interact. Chromium atoms replace the aluminum atoms in varying degrees, causing light in the ultraviolet, violet and yellow-green regions of the spectrum to be absorbed. It is the level of absorption in each region which determines the final color of the stone.

Should 1% of the aluminum atoms end up being replaced by chromium atoms, the resulting changes in light absorption levels in the yellow-green region leads to the beautiful rich red color that we associate with the finest rubies.

The definitive color of the best rubies are called “pigeon’s blood”, with qualifying stones commanding a high premium over lesser red-colored stones. The US has long referred to paler Rubies as Pink Sapphires but, due to the difficulty in establishing a workable method of classification, this name is not officially recognized. By international standards, all red Sapphires are eligible to be called a Ruby.

The Origin of the Name

The name Ruby comes from the Latin rubeus, meaning “red”. It is one of very few objects which have a name that is also its color. Another, probably more obvious example, being “orange”.

It’s not clear why Rubies aren’t simply called Red Sapphires, but it’s believed that the red color led early discoveries to be thought of as a different stone altogether. It wasn’t until scientific techniques developed sufficiently that it was realized that Rubies and Sapphires are, essentially, the same thing. It doesn’t quite explain, though, why ancient cultures had no trouble deciding that all the different colors of Sapphires were the same stone.

This uncertainty adds to the mystique of what is considered to be the King of Precious Stones.

The rich red of a Ruby has also long been considered the color of love, and is probably the reason why the color is used so often to communicate romance.

The Characteristics of a “Good” Ruby 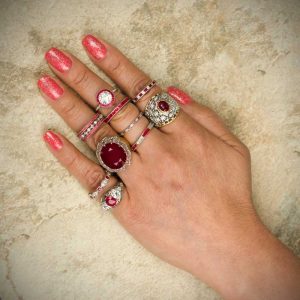 A Ruby is one of those things that, although you may have already seen what you think is a beautiful example, when you actually do see a high quality stone, the difference is remarkable. So how do we know the “good” from the “bad”?

Like all precious gemstones, Rubies are subject to a system of classification based around the same “Four Cs” that is used for Diamonds. The Four Cs are Color, Cut, Clarity and Carat Weight, but the region of origin is also an important factor when assessing a Ruby. A Ruby from Thailand or Myanmar would command a higher price than a stone of seemingly identical properties from elsewhere in the world.

Because all Rubies contain flaws, the richer the color, the better quality the stone will usually be and the higher prices it will command. However, the color of a Ruby is pretty easily manipulated and certain treatments to improve color and clarity are common with stones at the cheaper end of the scale. Fortunately, such treatments are also pretty easily identified by a trained eye, reinforcing the need to only ever use reputable dealers for the buying and selling of Rubies and other precious gemstones.

Named for its namesake Prince Edward, the son of King Richard II of England, despite not actually being a Ruby the stone has kept its name. Dating from the mid 14th century, the stone is actually a Spinel, a similar looking red stone often found in the same areas as genuine Rubies. The reason the classification has never changed is that the separation of Spinels and other red stones away from Rubies didn’t occur until the late 18th century. Prior to this, all red precious gemstones were classed as Rubies.

The stone forms part of the Crown Jewels of England, and is said to have been part of a helmet worn by Henry V at the Battle of Agincourt, and again by Richard III during the battle of Bosworth during which Richard was killed but the ruby saved.

Sculpted from a stone weighing 4 pounds and rated at eight and a half thousand carats, the Liberty Bell Ruby is sculpted into a miniature replica of the original bell in Philadelphia.

Because the piece was sculpted, rather than cut in the usual way, the clarity and color of the stone is below what you might expect from a high quality Ruby. Indeed the finished color was almost of a blackcurrant hue, and lacked most of the reflective properties of an expertly cut gemstone.

The Liberty Bell Ruby was stolen in 2011 but, although four men were arrested and indicted for the theft in 2014, the piece has never been recovered.

Another victim of a theft, but this time recovered after the payment of a ransom, the DeLong Star Ruby is one of the best examples of a star Ruby that is in existence. A star ruby is one which contains a natural refraction in a 6-pointed star, usually made up of an “X” with a center strip of light cutting through the X at it’s center point.

Weighing over 100 carats, the Ruby has its origins in Myanmar (formerly Burma) after being discovered in 1930. Originally purchased for just $21,400, it was donated to the American Museum of Natural History in New York in 1937. After being stolen and recovered in 1964, the stone was returned to its display in the museum, where it can still be seen to this day.

Valued at over $30 million, the 25 carat Sunrise Ruby is the most valuable non-Diamond in the world. Considered one of the rarest gemstones yet discovered, it boasts almost perfect color and clarity. Generally speaking, color and clarity diminish with stone size, but the Sunrise Ruby maintains all the qualities that make it one of the most revered of all precious gemstones.

Burmese in origin, the stone went to auction in May 2016 with an estimated value of $11 million but climbed to almost 3 times that figure in just 7 minutes, ending with a final sale price of $30.42 million. 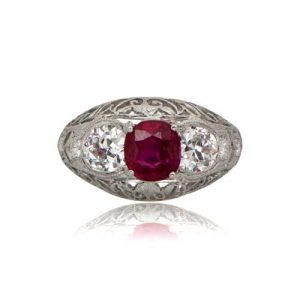 Although well suited to being set into necklaces, brooches and even tiaras, the Ruby is also perfect for being set in rings to suit all occasions. Often set surrounded by Diamonds to give a contrast between the clear purity of the Diamonds and the rich red of the Rubies, the stone has been adorned by the rich and famous for centuries.

Not to be outdone by 3rd husband Mike Todds gift to Taylor of a set comprising a necklace earrings and a bracelet set with rubies and diamonds, Richard Burton gave Taylor a ring in which was set an 8.24 carat ruby surrounded by diamonds. The ring, made by Van Cleef and Arples was sold in 2011 for $4.2 million.

Donated to the Smithsonian Museum of Natural History by Peter Buck, and named for his wife, the ring contains a Burmese Ruby of 23 carats, a size almost unheard of for the setting of rings.

Although considered one of the most valuable rings in the world, the piece has never been officially valued.

We mentioned the Sunrise Ruby above, as a famous Ruby, so it’s only right that it should also be mentioned here as the stone is now set into a ring with no other precious stones so as to not diminish it’s beauty and ability to stand alone. Designed by Cartier, the ring is the most expensive item of jewelry in the world taht does not contain a Diamond of any size or quality.

Containing a Burmese Ruby weighing 8.62 carats which was bought for $3.6 million dollars in 2006, the buyer – Laurence Graff – set the cushion cut Ruby in a simple mount for a client and renamed it after himself.

In 2014, the ring came up for auction at Sotheby’s in Geneva, and Graff bought it for a second time – this time for his own collection – for the then record price of $8.6 million.

Click here to view our entire collection of rings.