The art nouveau movement began in the late 19th century and, unusually for jewelry design at least, was all but over within 25 years. Although fashion is, by definition, a temporary affair, high quality jewelry pieces tend to buck the trend somewhat by remaining desirable and very wearable regardless of the current clothing and other trends. 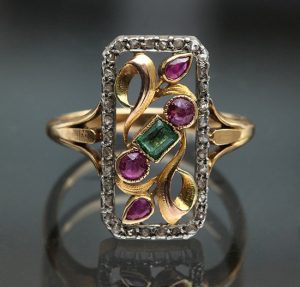 It’s true that certain styles are more en vogue than others, but a diamond engagement ring from a century ago is just as likely to be seen being worn as one created yesterday.

This is one of the rare qualities that rings and other jewelry pieces possess that most objects don’t. The same is true for vintage engagement rings produced during the art nouveau period.

Unlike its later brash, masculine cousin art deco, art nouveau is delicate and feminine, influenced as it was by both oriental style and a desire for simpler times.

Where art deco was industrial and full of angles and corners, art nouveau was curves, loops and swirls in an attempt to recreate the handcrafted look that had long since faded into the distance.

Flowers and exotic insects were often the subject of art nouveau jewelry, and even diamond engagement rings were rarely without an embellishment that followed the feminine ideals of the movement. Whereas, nowadays, a diamond is the undoubted focal point of an engagement ring, perhaps supported by smaller stones, art nouveau examples were often a combination of diamonds, pearls, other stones and even enameled objects.

Although very common today, platinum first came to prominence due to it being the favored metal for engagement rings of the period, with silver and white gold sometimes being used as a less expensive alternative. As demand for quality pieces soared, art nouveau as a movement lost its way somewhat, with rings and other items being mass-produced despite the original intent being a counter-point against the increasing industrialization of the world.

By the time World War I was under way, the transition into art deco was complete and the innocence of art nouveau was lost among the clang of machines and the clamor for substance over style.

Due to this trend towards mass-production, the quality of the pieces appearing in the marketplace suffered greatly, with increasingly cheaper alternatives being sought in preference to the exquisite design and craftsmanship of the early years of the movement.

Although art nouveau has never really hit the same heights since, the finest examples of diamond engagement rings are highly prized, due in part to their relative unavailability. This, in turn, has created a booming replica market, another irony that serves to demonstrate the loss of what art nouveau actually stands for.

My grandma has an art neuvo pin with many different colors and flowers. Hopefully will be passed down to me

Good idea for a cocktail ring.

I’m simply obsessed with art neuvo. It is stunning!

I’m in love with the one in the picture. Where do I get it??!

Loveee the flowery design on that ring!